Arthropods such as mites, ticks, centipedes, and millipedes play a crucial role in breaking down dead material like plant and animal residues. This is an important role because it results in the supply of plants with the minerals and nutrients necessary for life. It also keeps dead material from accumulating in the environment. During this process, excreta released by these organisms are not only nutrient-rich but are useful to other soil organisms too. For instance, bacteria and fungi feed on the excreta and decompose it further, releasing more nutrients in the process. Plants then pass along those nutrients to the animals that eat the plants. Arthropods function on two of the three broad levels of organisation of the soil food web: they are plant litter transformers or ecosystem engineers. Litter transformers shred and humidify ingested plant debris, which is deposited in faeces for further decomposition by other soil micro-organisms, and nurture the growth and dispersal of microbial populations. Large quantities of annual litter input may be processed (e.g. up to 60% by termites). The shredded plant matter in faeces presents an increased surface area of attack for micro-organisms, which, through the process of mineralisation, convert the organic nutrients in this plant matter into simpler, available plant nutrients.

Arthropods: the engineers in the soil 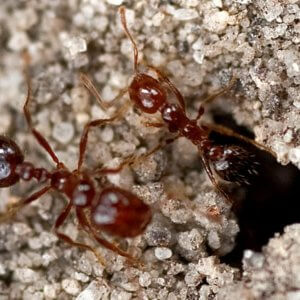 Ecosystem engineers alter the soil’s structure, mineral and organic matter composition, and hydrology. The burrowing of arthropods, particularly the network of tunnels and passageways that comprise termite and ant nests, improves soil porosity. This provides adequate aeration and water-holding capacity below ground, facilitates root penetration, and prevents surface crusting and erosion of topsoil. The movement of particles from lower horizons to the surface by ants and termites assists in mixing the organic and mineral fractions of the soil. The faeces of arthropods are the basis for the formation of soil aggregates and humus, which physically stabilise the soil and increase its capacity to store nutrients.

Is it too late for our soils?