This article will demonstrate that milk flocculation is caused by calcium instability which is induced by excess potassium on pasture systems. Also contributing is rumen pH fluctuations caused by rumen acidity or alkalinity due to sudden nutritional changes.

Did you know that bodybuilders often make milk flocculate on purpose?

The white part of milk is casein, which is an excellent source of protein.  Bodybuilders decrease the pH, thereby making the milk less stable.  They do this by slowly adding distilled white vinegar until the pH drops to the point where it starts to flocculate, which is when the casein separates from the rest of the milk.  This looks something like snowflakes floating in the solution.

They then pour this through a cloth to separate the casein protein from the rest of the solution,  slowly drying it in the oven, and then use it to make their protein drink.

What is there to learn from them?

The lower the pH, the less stable is milk.  It would not usually be a problem in the processing of milk, but with UHT1 processing, milk is increased to high temperatures and then decreased to low temperatures at a super high speed. Therefore with UHT processing, any milk instability will be exposed.

What is typically associated with pH or acidity control in our, or any animal’s body?

In turn, two minerals that have a profound effect on calcium conversion and absorption are magnesium and potassium.  For this reason, in the nutritional world, the balance between these three minerals is of the utmost importance.  Too little or too much of magnesium and or potassium will have a negative effect on calcium conversion in the body.  It will leave the body with no choice but to start drawing from its reserves, which are in the bones.  Older cows are more susceptible to grass tetany2 because of a decreasing ability to mobilise skeletal magnesium. In milk cows, the amount of minerals and energy required for milk conversion is enormous, and she cannot peak to her potential in these circumstances.

A word of caution, and to prevent an oversimplification of nutrition, there should be pointed out that when looking at milk stability, all nutritional, environmental and physical factors should be considered as pressure points.  For example, an early and late lactation animal is most likely to produce less stable milk.  An imbalanced nutritional ration would put these animals under severe pressure, for example, too low protein will decrease the cow’s ability to convert energy.  Low MUN3 tendencies can be used as an indicator to monitor  this. A sudden change in the roughage diet will also cause adjustment problems.  For example, a change to feeding maize silage should decrease the potassium levels in the diet,  therefore decreasing risk of tetany and milk flocculation. The problem is that doing this excessively and too quickly will lower the rumen pH, and will therefore temporarily inhibit calcium absorption, in turn inhibiting phosphate uptake6, thereby actually contributing to milk flocculation.  Another example would be oversupplying starch to compensate for lower summer pasture quality and energy levels. This can cause the same effect as with the maize silage, and subclinical acidosis can occur, inhibiting calcium uptake. Environmental factors, such as high summer temperatures and high humidity, and physical factors, such as inadequate water availability, exacerbate these effects.  When pressure is placed on cows through these nutritional, environmental and physical factors a perfect setting is created for the amplification of the potassium,  magnesium and calcium imbalance, and thereby the risk of of milk flocculation is increased.

In grazing dairy cows, the potassium, calcium and magnesium ratio often gets expressed as the staggers index (tetany2) on pastures. Note that staggers usually occurs 30 plus days after calving.

Ideally, the staggers index should be between 1.8 and 2.2.  Unfortunately, from early spring, through peak summer and until mid-April it is mostly above 2.2, as demonstrated in the graph (Leaf data4).

In early spring, the negative staggers index effects are usually diluted by high levels of concentrates and supplements due to early lactation.  Due to lower milk production in peak summer, late lactation cows usually receive less concentrates, and therefore have a higher dependency on pastures. These pastures have a high staggers index. The lower concentrates also means less minerals (eg.Ca) are fed.

Pastures on poorly balanced soils, which are dependent on high levels of nitrogen to get growth (Read more: Further proof of the positive effect of decreased nitrogen fertiliser), are far more susceptible to high potassium levels in the leaf (Read more: The potassium problem, or is it a nitrogen problem?), and elevated NPN5 levels, and therefore a high staggers index.  The latter will make the cow far more prone to heat stress even though it might be subclinical staggers.

Staggers treatment is the same as for milk fever, but prevention is a better option.  Since 2013 my clients in the high staggers zone have given an all day ad lib lick, giving the cow a free choice option. This way she tells us what her requirement is.  No nutritional program can do this 100% correctly, especially when you are trying to maximise pasture intake, and minimise supplementation and concentrate levels.  Environmental factors also vary from day to day. The result has been a  dramatic decrease in flocculation and staggers cases, as well an easing of heat stress has occurred.

In the past when the milk buyer tested flocculated milk and found the phosphate levels to be too low, they then applied a straight line nutritional assumption and told the farmer to feed phosphates. The farmer then added dicalcium phosphate to the cow’s diet [di means two parts calcium and one part phosphates].  This, in many cases, due to the two parts calcium, helped decrease the milk flocculation. When mono calcium phosphate [one part calcium] became the cheaper source of phosphates, the effect was far less.

The truth is a shortage of calcium uptake (hypocalcemia) – due to oppressed magnesium uptake (hypomagnesemia) from excessive potassium, and/or due to an acidic rumen – will have a negative effect on the conversion of phosphates, which will reflect in the milk.

It is clear that calcium shortage, due to excessive potassium, is the foundation for lowering milk pH and therefore is the cause of milk flocculation in UHT processed milk.  Still, the added effects of environmental and physical factors, as well as basic nutrition, will increase the incidents of milk flocculation.  Below is a tick list to evaluate your specific situation, especially between 15 January and 15 April. 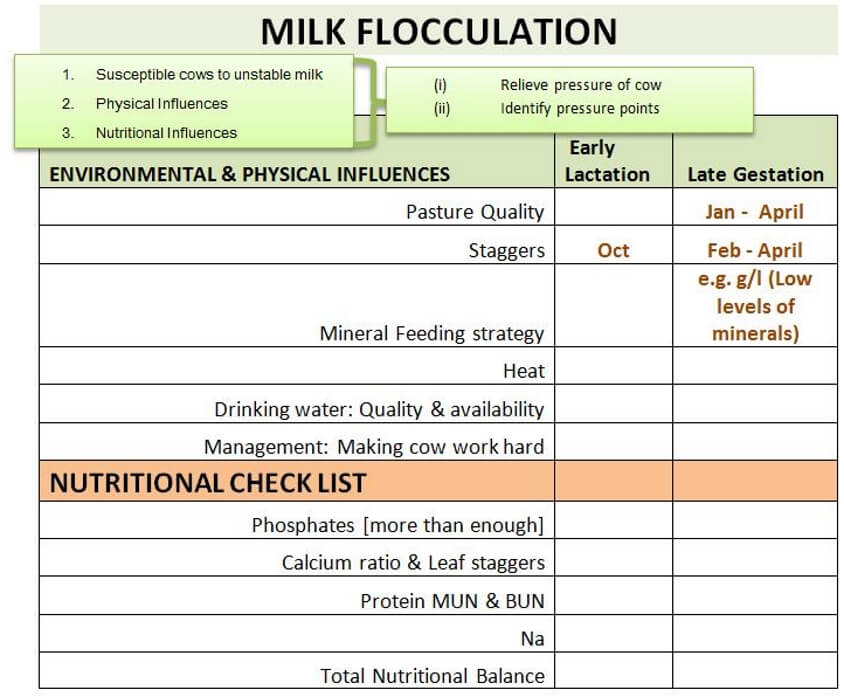 The potassium problem, or is it a nitrogen problem?
Scroll to top