Over 80% of plants live in a symbiotic relationship with a remarkable organism called mycorrhizal fungi. Through this symbiosis, the fungi and the plant naturally develop a lifelong bond of mutual benefit that has existed for over 450 million years1.

Mycorrhiza is a term used to describe the symbiotic relationship between mycorrhizal fungi and plants root system. First, the spores of mycorrhizal fungi germinate in the soil and make their way to the nearest roots. The roots are then colonized by fungi, and mycorrhizas are established. The fungus penetrates the root and creates an internal network of fungal structures inside the root cells, where the plant and the mycorrhizae exchange sugars and nutrients.

Finally, the hyphae continue to develop outside the roots forming an extended network of fine hyphae which cover up to 700 times more soil area than the plants own roots. This tangled network of fungal hyphae can reach a length of over 8000 kilometres2, as a result, the fungus and the plant can together absorb much more water and nutrients than they can individually. 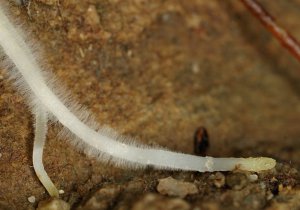 In addition to absorbing plant available nutrients, mycorrhizal fungi secrete enzymes which are able to break down organic matter in the soil. The organic matter is broken down into nutrients which can then be absorbed. The two processes which mycorrhizae use to supply nutrients to plants can happen concurrently or in isolation of each other.

The relationship between plant roots and mycorrhizae is often reduced to just the exchange of nutrients and water, but the relationship goes much deeper. Mycorrhizae actually also protect the plant from pathogenic microorganisms. They do this by creating a physical barrier which makes it difficult for pathogens to penetrate the roots. As plan B, if the barrier is down, mycorrhizal fungi concurrently produces antibiotics which kill pathogens that may attack the plant from the outside and those that have already entered the plant’s root system. On top of this, mycorrhizae fungi help stimulate the growth of the plant by producing auxins (plant growth hormones) which help in making the plant to be more vigorous.

In return for all of these services, the plant provides the fungus with the organic nutrients which are secreted as root exudates. This constitutes the main carbon and energy source for the fungi. The plant also provides the fungi with growth factors such as biotin and aneurin which the fungi use in their chemical defense system3.

This relationship between root systems and mycorrhizae is a true example of a win-win situation. Practices implemented in the soil should facilitate and maintain this mutualistic partnership. The benefits of it are far too important to lose.

Who are the real environmentalists?
Scroll to top