Potential mineralisable nitrogen on a dairy farm in Tsitsikamma

The soils of the Tsitsikamma area are predominantly sandy with lower levels of silt and clay. Silt and clay has a larger surface area with smaller pores that act as micro-habitats for soil micro-organisms. There is also cation exchange sites associated with higher silt and clay contents that is responsible for capturing and storing nutrients in the soil.

Nutrients in the mineral forms are much more mobile, because they can dissolve easier in soil water and then be transported in the soil. There is the possibility for them to be leached to the deeper layers of the soil profile after fertiliser application. NO3- and NH4+ is an example of nitrogen, a primary nutrient needed for plant growth that may be lost through leaching in the mineral form.

These potential losses can be replaced through nitrogen mineralisation where organic nitrogen is converted to inorganic nitrogen (NO3- and NH4+). This allows these nutrients to be stored and recycled more effectively when the soil is healthy, have a good structure with enough air and pore spaces. Nitrogen mineralisation can be improved by management practices such as reducing nitrogen application and minimal to no tilling. This can have a positive effect on the environment and a farmer’s finances by having less artificial nutrients in the system.

An effort was put in by a farmer in the Tsitsikamma area to follow these practices. The soil life and structure was improved on his farm and had a positive effect on the natural cycling of nitrogen in his soils (Figure 1). The negative nitrogen mineralisation rates indicate that NO3- are stored in their bodies and will be released to the soil when they die off in unfavourable conditions such as limited soil water and very high temperatures. It is a good thing that NO3- in this form of nitrogen is stored in the micro-organisms, because it reduces the leaching potential.

It is important to manage and take care of the soil health, because only 4% of nitrogen is in the available mineral forms and 96% is in the organic nitrogen form that is less available to plants.

There is thus 96% of organic nitrogen, which amounts to 1 800 mg/kg in this farm that can potentially be converted to the available inorganic forms of NO3- and NH4+ that is currently sitting at 23.81 mg/kg (Figure 2). 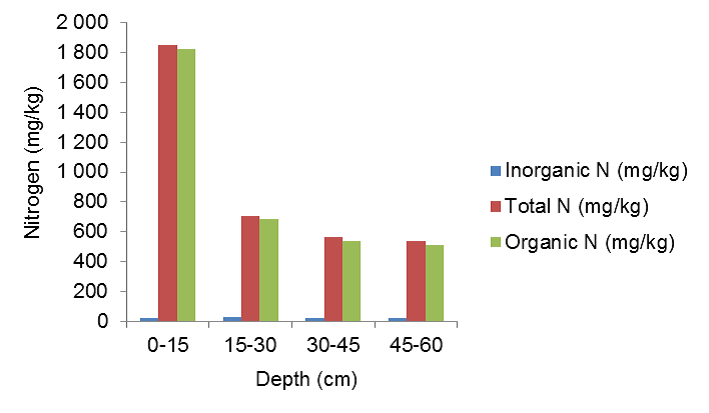 By relying more on improved soil life and better structured soils a farmer can reduce his nitrogen fertiliser application rates and save him a lot of money by letting the soil life convert the organic nitrogen into inorganic nitrogen forms that can be taken up readily by the pastures.

Marno Fourie
Marno worked on the Woodlands Dairy Sustainability Project from January 2013 to September 2019. He no longer works with Trace & Save.

Providing for your soil life herd