There are two things that contribute to this distinction: 1) how effluent is used, and 2) where effluent is used. Good effluent management is a challenge and requires adequate planning and resources. Jason has written a previous blog about this very topic: Turning effluent from waste to benefit. The reason for this update is that Trace & Save is continuously collecting data, researching, and learning, therefore there are always new things to add to old topics.

Trace & Save takes samples of effluent on many farms twice a year. This means that we have collected over 200 effluent samples over the last six years. I have included a table below showing the average (with standard deviation), minimum and maximum values from these effluent samples. The aim of showing this data is to get farmers to ask themselves three questions: 1) have I analysed my effluent recently, 2) what is the relative value of my effluent, and 3) am I spreading my effluent in the correct places? The second and third questions can only be asked once the first question has been addressed.

Farmers need to take regular samples of their effluent so that they know what they are dealing with. Once you know the nutrient values of your effluent, you can calculate the relative financial value. For this table, I have used an average of 30 000 litres of effluent generated per day, which is a fair estimate for an 800 cow dairy farm. I have also included the relative kilograms that would be applied of each nutrient if 30 000 litres of effluent was applied to one hectare. 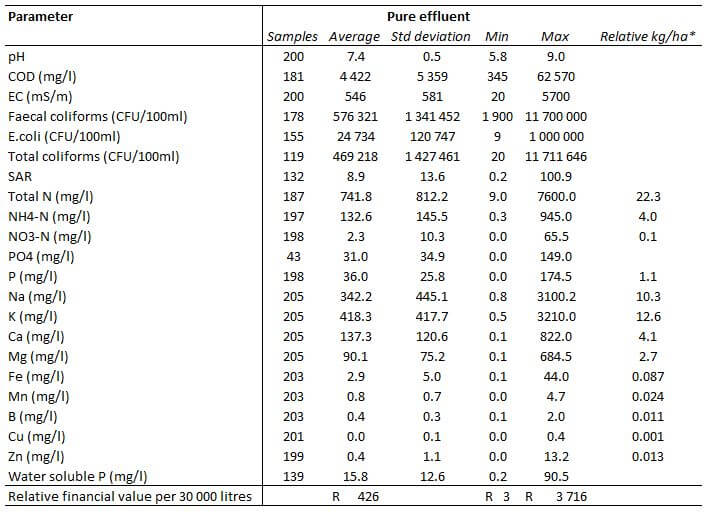 To answer the third question, you will need to have soil sampling data for your farm. Trace & Save looks at the levels of total nitrogen, phosphorous, potassium, sodium, and magnesium to determine the suitability of a camp for being irrigated with effluent. Where camps have deficient phosphorous and potassium and are not excessive in nitrogen, sodium, and magnesium, then they are ideal for the spreading of effluent. The problem we have encountered is that a large proportion of irrigated areas on dairy farms have adequate or excessive levels of four or five of these nutrients, making those areas not ideal for the spreading of effluent. On the contrary, when effluent is spread on these areas, it is detrimental to the soil. It can also lead to pollution of freshwater resources.

The samples included in the table above have come from a multitude of effluent management systems. They are all pure effluent in that the effluent had not been mixed with any freshwater before the samples were taken. But the systems vary from single ponds to three pond systems, to mechanical separators and weeping walls.

The average relative financial value, with the assumed production of 30 000 litres of effluent per day, is R426 per day, but the range is huge – between R3 and R3 716 per day. Results vary between farms, and within the same farm between months and years. That is why it is important to build an idea of the value of the effluent through multiple samples taken each year. And to evaluate the effluent management system on a farm to see if it is creating the most valuable effluent possible. In this way, effluent can be used to offset the cost of fertiliser, especially when focussing it on camps that need it (based on the soil sampling). This offset is important when considering the cost of infrastructure needed to dispose of effluent effectively. It is only worth the investment if the correct mechanism and camps are identified for beneficial disposal.

Effluent may be a waste product generated on dairy farms, but it can be a valuable resource when disposed of correctly and in the right places. I encourage all farmers to assess their effluent management system and see whether there are any improvements they can make, that will help them get better value from their effluent.

Webinar – The financial benefit of a more sustainable approach to dairy...
Scroll to top